Chaplain Tom Phelan Sr. retired in July from the Kansas Department of Corrections after 20 years of service as a clinical chaplain.

Tom received the Lord Jesus as Savior and was baptized by Pastor George Whitman of Latham (New York) Bible Baptist Church in 1972, and spent 10 years in Bible college and university study, completing a PhD from Bob Jones University School of Religion in 1982. While in school he served in assistant pastoral positions and afterwards ministered as a full-time pastor. He recognized God’s call into the chaplaincy ministry though, and became a military chaplain in 1984. He returned to GARBC church membership and received endorsement with the Regular Baptist Chaplaincy Ministries in 1992. 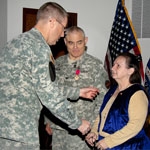 Tom served at military posts throughout America, earned combat veteran status in deployment to the combat zone in Kuwait and Iraq, and retired as a U.S. Army Reserve chaplain in April 2012.

Chaplain Phelan began his service as a prison chaplain with the Kansas Department of Corrections in February 1994 at Ellsworth Correctional Facility. He then ministered for 12 years at Larned Correctional Mental Health Facility, specializing in those incarcerated who display mental health concerns. While serving there he completed an additional MA in professional counseling from Liberty University. In 2006 Tom transferred to the El Dorado facility, which in 2010 completed its 11,500 square foot Spiritual Life Center, one of the largest prison complexes in existence; it includes an auditorium seating nearly 300 inmates. Prison studies have demonstrated that prison ministries bring about positive results in inmates’ lives—including fewer returns to prison, greater assumption of personal responsibility, improved family relationships, and new hope and meaning. As a corrections chaplain, Tom has preached the gospel and seen inmates saved and baptized inside the prison walls, and later released with a commitment to serve the Lord.

Tom met his wife, Ora Lee (Jones), at Faith Baptist Bible College in Ankeny, Iowa, in 1974 and joined Olivet Baptist Church, Westwood, Kan., her home church, where they were wed by Pastor Floyd Davis in 1975. They have raised seven children, one of whom passed away. They are currently restoring an older home and are expecting the birth of their ninth grandchild and first great-grandchild later this year. The Phelans, members of Westlink Regular Baptist Church, Wichita, Kan., are looking forward to continued ministry in sharing God’s Word and in music and writing.

“Chaplain Phelan will be remembered for his leadership and for the impact he has had on those to whom he has ministered,” says Chaplain John Murdoch, director of GARBC Chaplaincy Ministries. “We pray God’s richest blessings on Tom and Ora Lee as they continue to serve Him in whatever new arena He has prepared for them.”