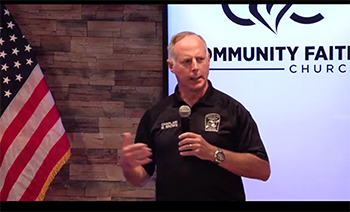 “I was honored to have been asked to speak,” Brown says. “I was there speaking as a police chaplain rather than in my capacity associated with the GARBC. I was able to share about my experiences during 9/11 as I was on active duty in the Air Force at the time. I also was able to share what the community can do to support all of our first responders.”

The service focused on those who perished during the attack and the sacrifices that first responders and the military have made since then. In addition to Brown, the county sheriff and the city assistant fire chief also spoke.