Photo from the Past Comes with a Story

When a member of the Dowden family found a remarkable photo on the internet, that person presented the photo to Jack Dowden. 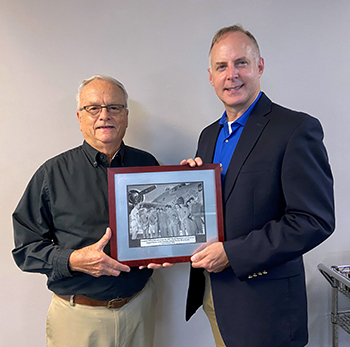 FLINT, Mich.—When a member of the Dowden family found a remarkable photo on the internet, that person presented the photo to Jack Dowden. The photo shows Jack’s father, Milton, serving as a chaplain on a Pacific island during World War II.

Milton was pastor of First Baptist Church, Merton, Wisconsin, when the attack on Pearl Harbor happened, setting World War II into motion. He then moved his family to Waterloo, Iowa, where he left with the Army as a chaplain, serving two and half years.

When the photo was taken, around 1944, military chaplains were endorsed by the American Association of Christian Churches. The GARBC became an authorized ecclesiastical endorsing agent for chaplains in 1967. Today the GARBC endorses nearly 100 men and women called to serve as chaplains in the military, institutional settings, and community services.

Jack Dowden is one of those whom Regular Baptist Chaplaincy endorses. He is a chaplain at a medical center and is pastor of seniors at Emmanuel Baptist Church, Flint, Michigan.

Next post Photo from the Past Comes with a Story