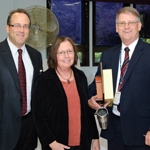 God has allowed Chaplain Jerry Hamblin to have two strong avenues of service interwoven in his life’s ministry for God and country, and on Sept. 18 he was honored with a 30-year Government Service Award.

After serving four years in the U.S. Navy, Jerry enrolled at Northwest Baptist Seminary (now Corbin University) and then became a chaplain in the United States Navy Reserve, serving until his retirement in 2010. (Read “Chaplain Hamblin, USNR, Retires.”) During his 28 years of chaplaincy he was activated over 46 times, the last time to Kuwait in 2008.

Concurrently with his chaplaincy in the Navy, Jerry has also been serving as a chaplain with the United States Department of Veterans Affairs in the VA hospital in Bath, N.Y.

Over the years, Jerry has developed relationships with patients and family members, staff, and administrators in various venues—in the domiciliary, in the chapel, in hospital rooms and hallways, on the softball field, and in his office. (In fact, he is seldom found in his office.) Recently he established a phone prayer line for the staff. Once a week staff members call in to share prayer time and hear a short devotional. The prayer line is a new approach to ministering to a busy staff who do not always have time to “go see the chaplain.”

One of Jerry’s primary responsibilities now is ministering to those in hospice care. He is excited about his privilege to care for those who are facing eternity. It’s a special joy to help fellow believers prepare for graduation to Glory, he says. “I love helping believers realize that when they take their last step here, the next step will be in Glory!” If a veteran is to have a military funeral and burial in the National Cemetery on the grounds of the hospital, Jerry follows through with those arrangements, often conducting the service himself.