This summer brought several weeks of travel for Regular Baptist Chaplaincy director and endorser Manning Brown and his wife, Jennifer. 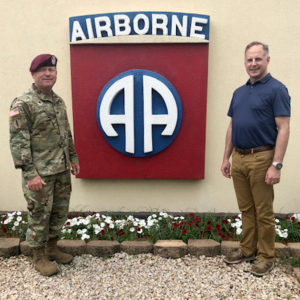 In June, their travels began with a visit to Ch. (Lt Col) Rick Steen and his wife, Kim. In addition to serving as a pastor, Rick is also the wing chaplain for the 134th Air Refueling Wing at McGhee-Tyson Air National Guard Base in Knoxville, Tennessee. While there, Manning observed drill weekend chapel activities and met with wing leadership. Manning also made a presentation regarding the chaplaincy during the Sunday service at the church where Rick pastors.

After visiting the Steens, the Browns headed to Ft. Bragg, North Carolina, to meet with Ch. (COL) Jack Stumme and his wife, Cindy. The trip included a tour of the post and observing a jump by Airborne soldiers. Jack is jump qualified, regularly participating in jumps with the paratroopers. Jennifer attended with Cindy a “Connections” training event for chaplain spouses assigned to the base. You can read more about “Connections” here.

From Ft. Bragg, the Browns traveled to Hagerstown, Maryland, to visit Ch. (Maj) Ron Faith and his wife, Sarah. Ron is assigned to the 167th Airlift Wing as the wing chaplain. The visit included lunch with the wing commander and vice commander and other wing staff members. In addition, the Browns were given a tour of the flight line and a C-17 aircraft. During the visit, Manning spoke during Sunday School and presented the chaplaincy during the worship service at Evangel Baptist Church, where Ron is the pastor.

From Maryland, the Browns then drove to Lapeer, Michigan, to meet with Michigan State Police chaplain David Hill and his wife, Mary Jo. David, who recently retired from the full-time pastorate, serves as chaplain in the Lapeer Post. You can read more about his role as chaplain in “Police Chaplaincy: Expecting the Unexpected.” 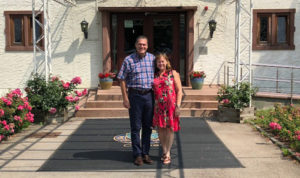 In July, the Browns traveled to Germany to meet with Ch. (Col) David Carr and his wife, Stephanie. David is the command chaplain for US European Command in Stuttgart, Germany. While there, the Browns were given a mission briefing and tours of the bases in the area, and Manning participated in a morning Bible study that David led for senior leadership. 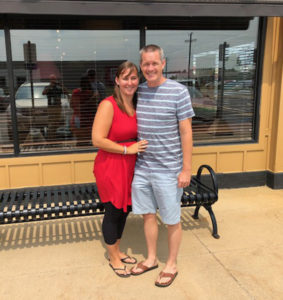 Summer travel wrapped up with a visit to Ch. (Capt) Scott Conner and his wife, Leah, in Cadillac, Michigan. Scott and Leah are full-time Awana missionaries serving in northern Michigan. Scott is also a chaplain assigned to the 45th Space Wing, located at Patrick Air Force Base, Florida. While visiting the Browns, the Conners discussed their work with Awana as well as Scott’s duties serving as a chaplain in the Air Force Reserves.

“The highlight of ministry is always the people,” Brown says. “It is a joy for Jennifer and me to meet with chaplains and their families—to encourage them and enjoy a time of fellowship together. Likewise, when we are able to go to our churches and share what chaplains are doing, it is exciting to see congregations realize the amazing work that chaplains do.

“It is through the support of our churches that the GARBC is able to serve as an endorsing agent and send those called to serve in the military, institutions, and community service as chaplains. We are always looking for opportunities to share about Regular Baptist Chaplaincy and meet with individuals interested in serving as a chaplain.” Contact Manning Brown to learn more about chaplaincy or invite him to speak.

Posted in Chaplain News, From the Director, Ministry Highlights on August 23, 2018.

Victory International School in Myanmar is grateful to hold classes online and in person amid political ...more

Sunshine Baptist Fellowship to Host Conference on the Need for Truth

The Sunshine Baptist Fellowship will be hosting a three-day conference Oct. 16–18 at Daniels Road Baptist Church in Fort Myers, ...more

The arrival of July can mean but one thing: we enjoy the afterglow of our Annual GARBC Conference. ...more