Honoring Those Who Gave the Ultimate Sacrifice

Memorial Day is solemn, and rightly so. But within the solemnity lies the joy of being blessed to live in a country where freedom still reigns. 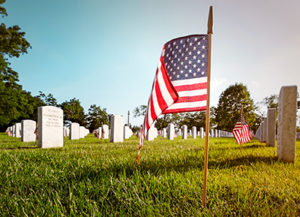 Memorial Day. A day our nation stops to remember its sons and daughters who gave their lives for its freedom and liberty.

My entire life I have been associated with the military—first as a military kid, later as a military member, and now as a military retiree. And while there is plenty of debate on social media about how Memorial Day should be observed, the day has always been the same for me. Sure, as a kid, I viewed it as the last long weekend before summer break. And while I was in the military, I enjoyed the extra day off to spend with my family. Those days were typically filled with picnics, watching favorite war movies, and just being with the ones I care about.

The day is solemn, to be sure. And rightly so. Whether putting flags next to tombstones of the fallen, laying wreaths in town centers, or just taking a few moments to remember those who gave the ultimate sacrifice, each of these is a good way to spend the day. But good also are the picnics, the games, the fun, and, in my mind, the laughter—for within the freedom that our nation’s sons and daughters fought and died for lies joy.

That’s what they sacrificed themselves for and, I’m convinced, one of the ways they want their sacrifice to be remembered: the joy of being blessed to live in a country where freedom still reigns . . . one nation, under God, indivisible, with liberty and justice for all.

Posted in From the Director, Ministry Highlights on May 25, 2018.

Previous post Honoring Those Who Gave the Ultimate Sacrifice