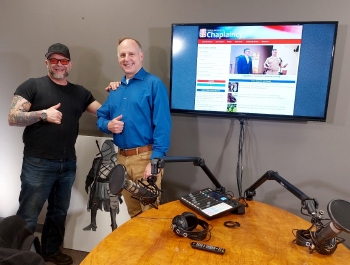 The hourlong podcast, The Warrior’s Way, included discussion about Brown’s background and how he got involved in chaplaincy. The conversation then focused on chaplaincy in general and Regular Baptist Chaplaincy itself.

“It was a great opportunity to talk about the unique ministry chaplains have in their respective communities,” Brown says.

“Although I was a spokesman for the Air Force for many years, doing a podcast was new to me,” he says. “I was a little nervous because it was live. But after a few minutes it was like talking over breakfast.”

Posted in Chaplain News, From the Director, Ministry Highlights on April 26, 2022.