A group of men gathered at the Ionia Correctional Facility for a prison outreach event that included sharing the gospel and playing basketball. 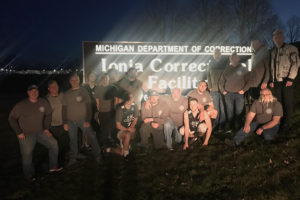 IONIA, Mich.—A group of men gathered at the Ionia Correctional Facility for a prison outreach event that included sharing the gospel and playing basketball. GARBC chaplain Jim Combs, pastor of The River Church in Holly, Michigan, and about 20 men spent two hours with inmates on the evening of April 20.

After in-processing at the facility, the team prepared for the event, setting up a sound system and warming up for the night’s basketball game. Then they greeted the inmates with handshakes and words of welcome, and the game was soon under way.

The first half of the game was close, at 31-30, with the ministry team in the lead.  During halftime, a comedy and magic act entertained the inmates, and then Combs shared his testimony.

“This isn’t about religion,” Combs told the inmates. “This is about a personal relationship with Jesus Christ. There is no one beyond God’s love and forgiveness. Even in here. That is why we are here tonight. To share Christ.”

During the second half of the game, the inmates rallied to a 68-50 victory.

After the game, members of the team prayed with inmates. Manning Brown, director of Regular Baptist Chaplaincy, was on the team that night. “It was truly an amazing event. I have never been in that type of environment. But sitting with these men, praying with them, was humbling. The gospel brings hope, no matter what life’s circumstance, and Christ is the giver of that hope. To share it was a privilege. I can’t wait to go on future trips.”

Kenny Hovis, prison ministry director at The River Church, is responsible for the logistics and coordination of these visits. “Last year we were able to reach nearly 60,000 prisoners and inmates,” he said. “This year we are hoping to reach 100,000. We’ll be in prisons in Indiana, Kentucky, Ohio, and of course here in Michigan. As long as He keeps opening doors, we’ll keep moving forward.”

Moving Forward as a Fellowship

Listen as interim GARBC National Representative David Strope describes how we are moving forward as a ...more

Pastors and deacons from Indiana's Crossroads Fellowship churches attended a leadership summit focused on the ministry of ...more

You Cannot Help but Worship

You may be either an atheist, an agnostic, a Muslim, a Jew, a Christian, a Wiccan, a Buddhist, a Hindu, or simply an individual who ...more