David Hill has been a police chaplain for 21 years. Police chaplaincy, he says, is a ministry of expecting the unexpected. 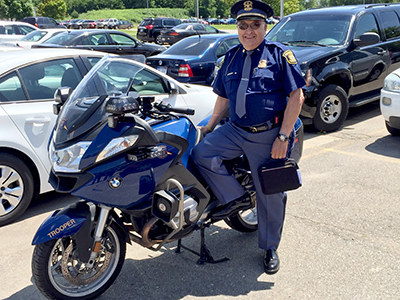 It has been my distinct privilege to serve for 21 years as a departmental chaplain with the Michigan State Police. During my career I have been assigned to the post nearest my home. I could sum up my job description in one phrase: pastor the troopers and their families.

The ministry of police chaplaincy is as varied as you can imagine, as it deals not only with troopers, but also with victims of crimes and often the perpetrators of crimes. It is a ministry of expecting the unexpected.

Here are a few examples of the unexpected: speaking to over three hundred command officers concerning the departmental chaplaincy, teaching a class in the police academy with five minutes’ notice, counseling and praying with a 10-year-old boy who accidentally shot and killed his father in a duck hunting accident, flying to the Upper Peninsula of Michigan on a state police plane to counsel and pray with a departmental member in the tragic loss of their toddler son.

The list could be multiplied many times over, but now some scenarios will help paint the picture for you of police chaplaincy.

Fatal mobile home fire. I was called to the scene of a mobile home that had caught on fire; an infant had been killed. The burned home was treated as a crime scene until the investigation was complete. It was pouring rain, so the state police used my car as an interview room. I served as a liaison between the first responders and the parents and grandparents. My responsibility was to comfort, counsel, and pray with the grieving family, keep the prying media at bay, relay information from the first responders to the family, and explain the investigative procedures to the hurting parents.

Suicide. While on patrol, troopers and I were called to a home where someone had committed suicide. The troopers investigated the incident inside the home and asked me to minister to the family members outside and make sure no one else entered the home. The victim’s brother-in-law was struggling with this family tragedy because his wife had taken her own life just six months earlier. I listened, counseled, quoted Scripture, and prayed with the family members outside. Once the medical examiner was finished, he asked the troopers and I if we would assist him with the postmortem at the morgue. When he was ready to begin, the medical examiner asked me to take the notes for the inquest. That was a first for me.

Line-of-duty death. I was paged to the intensive care unit of a distant hospital after one of our officers was killed in a traffic accident. I had known this officer well and conducted his wedding ceremony 14 years earlier. When I arrived, two departmental chaplains were already managing the flow of dozens of officers from several departments who came to the hospital to show their love and support. Chaplains prayed with many individual officers and family members. Late in the afternoon, about 50 law enforcement members were gathered in a waiting room. The new widow came in to speak with them, share her testimony, and invite them to visit her husband one final time before his parents arrived. When she left the room, I introduced myself and led all of them in prayer for the wife and children. I attended the funeral home visitation and the state police funeral and have visited the family since.

Comforting a rape victim. Once again I was called to the post to counsel a rape victim who had been beaten and left to bleed to death. Fortunately, first responders arrived in time to save her life. As I counseled her, I was able to share the gospel with her. She responded and trusted Jesus Christ as her Savior! But it didn’t end there. She went home and led her mother to Christ. I later was surprised to learn that the victim was related to a member of my church.

Moving the piano. I received a page from a detective who asked if my church could use a piano. He explained that his friends were moving to Florida and couldn’t take the piano. I figured it would be an old upright piano sitting in their basement full of mice. But I was seeking to build a friendship with him, so I responded, “We can always use another piano.” As it turned out, the piano was a nearly new and rarely used baby grand that sat at the top of the staircase in their home. My church had the piano moved to its building. When we were seeking to add it to the church’s insurance policy, we discovered the price tag on the piano was $25,000! Thank you, Lord. Maybe the friendship was further along than I had realized. By the way, my detective friend says that he is a post-atheist!

Making rounds in the police academy. One of my more delightful duties is making rounds in the police academy dorms. There I have opportunities to make new friends, counsel, hand out literature and Bibles, and pray with the recruits. One night while visiting two recruits in their room, another recruit came in and asked if I was going to have prayer for the whole floor. I answered in the affirmative and asked if he would tell the other recruits and invite them to this room. He returned in three minutes or so with 17 recruits! I asked for specific prayer requests and then led the group in prayer. I have encouraged recruits who are believers to be witnesses. Several have conducted five-minute devotionals by the elevators just before lights out for any recruit interested on that floor! Many are interested. I have completely depleted our chaplaincy’s supply of “police Bibles,” which can be given only if a recruit asks for one. During the evenings I have opportunities to build relationships with the instructors in the academy. These relationships have also proven fruitful, for even the instructors feel free to come for counsel and encouragement.

“You will have to see our chaplain.” A group of pastors approached my commander about coming into the post and praying for the troopers. He told them they would have to contact the chaplain because he handles all of those things. May I just say that we are a little nervous having 10 civilians in the post at one time, because much of the department’s work is confidential. But the pastors and I arranged a date and time for the prayer meeting and cleared it with the commander. I prepared a prayer agenda to help the pastors pray with insight for our officers and department. As it turned out, at the exact time the prayer meeting was taking place, 10 officers were out arresting an individual who had threatened to kill several officers! God’s amazing timing provided prayer cover over our troopers in a potentially volatile situation.

Although this is by no means a complete picture of police chaplaincy, it does give you a glimpse into this world. Personal, one-on-one relationships are built with officers while on patrol. Our rule is, “What’s said in the car stays in the car,” so I would be reluctant to comment on those opportunities.

I am so thankful for the endorsement of Regular Baptist Chaplaincy, which provides prayer support, encouragement, instruction, and fellowship with other chaplains at our national conferences, not to mention the many phone calls and e-mails from the chaplain endorser, Manning Brown! Serving Christ in this harvest field is a privilege.

David G. Hill serves as a chaplain with the Michigan State Police.