Wanting to show support for its village’s police department, New Life Baptist Church provided a meal for each officer and staff member of the Lake in the Hills Police Department. 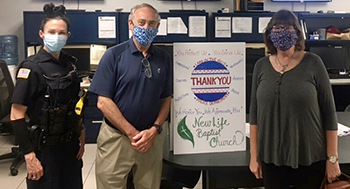 Ch. Mark Wood delivers meals to the Lake in the Hills, Ill., police department on behalf of New Life Baptist.

LAKE IN THE HILLS, Ill.—For more than five years, Pastor Mark Wood of New Life Baptist Church has been a chaplain with the Lake in the Hills police department. While it has taken time to build a relationship of trust, “the chaplain” is now a valued member of the team.

“I have a good relationship with the PD,” Wood says. “They are very supportive of my involvement.”

As a chaplain, he does ride-alongs with the officers and assists during crisis situations, including death notifications and traumatic incident counseling. Given the nationwide civil unrest of the past few months and the negative portrayal of law enforcement in the media, Wood has a special concern for police officers.

“People were vilifying them all because of a few awful situations in the news,” Wood says. “I wanted to let them know that we were behind them and supporting them.”

A member of New Life Baptist Church suggested that the church provide meals for the Lake in the Hills police department. Members of the church paid for food to be catered from a restaurant. When the restaurant learned who the meals were for, it included dessert for free. Volunteers provided drinks and boxed about 40 meals, which included barbecued pork and sides.

The limited contact Pastor Wood is allowed to have with the department has posed some challenges, but that doesn’t mean he hasn’t been able to minister.

“I have been texting some of the officers and going out to lunch with some of them,” he says. “Usually I will buy the lunch out and bring it back to the PD to eat with the officers in one of the rooms there. In addition, one of the officers recently found out that he has cancer. It was devastating to him and his family. We had some individuals in our church that were so burdened by this that they gave money to help their family through this hard time. It was such a joy to be able to deliver the money in the form of store gift cards to him. He was shocked and very emotional when he received them. It brought him to tears.”

In addition to his regular care as a chaplain, Wood says he is “always looking for ways to do more.”

Previous post Photo from the Past Comes with a Story