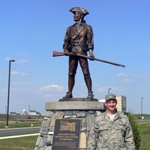 Recently Chaplain John Murdoch had the privilege of speaking at Evangel Baptist Church and then conducting an endorsing visit to the 167th. During Chaplain Murdoch’s visit, Faith gave Murdoch a briefing of his duties and a tour of the base. Chaplain Murdoch met the base commander and Chaplain Lieutenant Colonel Reynolds, the command chaplain for the base.

Pastor Faith has served at Evangel Baptist since 1999, ministering as associate pastor until 2004, and since then as senior pastor. He and his wife, Sarah, have two children, Naomi and Joshua.