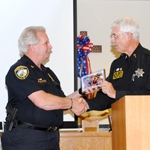 BROOKVILLE, Ohio—Entering Bible Baptist Fellowship on Sept. 9, someone might have wondered who got shot. Uniformed police officers from six law enforcement agencies were there that day. While their purpose was serious, it wasn’t a disaster that had brought them to the church. They were there to be honored on Law Enforcement Appreciation Day, the first celebration of its kind in Brookville history. To honor the officers, the church gave each one a personal gift, and gave plaques to the three departments that regularly patrol the Brookville community. These specially designed, personalized mementos read, “In appreciation for your dedication and service to our community.”

Chaplain John Murdoch, director of Regular Baptist Chaplaincy Ministries, “brought a fine message and introduced the Chaplaincy Ministries to the congregation and guests,” says Pastor Laird Baldwin. Chaplain Murdoch shared four reasons from Romans 13 why every believer should obey and honor law enforcement officers. He also sang one song with Dave (John’s twin brother) and Darlene Murdoch, who provided special music. Pastor Baldwin says, “I cannot say enough good things about Chaplain John’s ministry among us and the blessing we enjoyed. It was truly one of the highlights of our brief church history.”

Not only did Law Enforcement Appreciation Day receive front-page coverage from the Brookville Star, but Chief Jerome invited Pastor Baldwin to speak at the 9/11 Patriot Day observance at the Brookville Police Department. Present on that occasion were the police and fire departments, the local VFW post, all the members of the city council and mayor, and the Brookville High School Band.