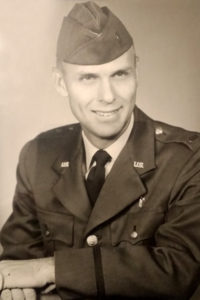 Harold was born into a Christian family in central California, and came to know the Lord at an early age. He attended Westmont College in Santa Barbara, where he met Marjorie Trowbridge, who would become his wife and partner in the Lord’s work.

After graduating Dallas Theological Seminary, Harold took the pastorate of his home church in Modesto, Calif., ministering there for five years. In 1959 he joined the Air Force as a Regular Baptist chaplain. He and Marjorie served the Lord in the chaplaincy for 25 years, serving in numerous states, as well as in Greenland, Philippines and Germany. Harold also had the distinction of being the first chaplain to go into Vietnam to minister to the troops in the early 1960s.

Upon retirement from military service, Harold and Marjorie moved to the Northwest, where he took a pastorate at Enumclaw (Washington) Baptist Church. He later became executive director of Baptist Family Agency. After retiring a second time, Harold continued working in church ministry, serving as an interim pastor and leading Sunday School classes and Bible studies. For his lifetime of pastoral ministry, he was awarded an honorary doctorate by Corban University, Salem, Ore.

Marjorie Hayes passed away in 2008. Harold is survived by their children—Carolyn, Philip, Kathleen, and Paul—and their spouses, 12 grandchildren, 17 great-grandchildren, and his older brother, Raymond.

Previous post Compassion Fatigue: When You Care So Much It Hurts YOU