Chaplain (Colonel) Tom Phelan, a Regular Baptist chaplain, ministered to mobilized Soldiers of the Texas National Guard 72nd Infantry Brigade Combat Team as they deployed overseas in the summer of 2009. This past summer he again had the opportunity to greet them upon their return to Fort Bliss. Chaplain Phelan regularly meets with Soldiers and other service members as they fly out to war and as they fly back from combat. He visits with them and counsels as needed, leads them in prayer, and greets them or bids them farewell with a handshake at the airfield.

Ch Phelan, a combat veteran, has served 18 months at Fort Bliss, Texas, as the reserve components’ mobilization and coordination chaplain and as the staff chaplain for the Fort Bliss Mobilization and Deployment (MaD) Brigade. The MaD Brigade has been described as an organization that “never sleeps,” annually mobilizing and deploying nearly 20,000 service members from the Army, Navy, Air Force, and Marines to the war zone, and redeploying them from combat and returning them home. 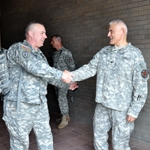 In his military ministry, Ch Phelan has met hundreds of military flights, providing ministry and pastoral care for their reserve component service members, as well as welcoming home Fort Bliss active duty units from combat in the company of the commanding general. His service in mobilization has included thousands of visits, hundreds of counseling sessions, and numerous military briefings, as well as his work as a certified instructor of Applied Suicide Intervention Skills Training (ASIST). In addition to his primary military mission with mobilizing units, Phelan has also served as the main post chapel senior pastor, provided contingency pastoral support for the McGregor Range Chapel and other Fort Bliss chapels, and served as chaplain for the local chapter of the Military Officers Association.

Previous post A Place to "Come Apart and Rest"