Chaplain Supports Soldiers and Their Operations, No Matter the Environment

In any military environment, be it real-world or training, you're unlikely to find a more approachable figure than the unit chaplain. However, as Chaplain Peter Klotzbach points out: That's the point. 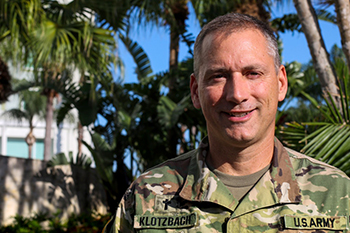 ORLANDO, Fla.—In any military environment, be it real-world or training, you’re unlikely to find a more approachable figure than the unit chaplain. However, as Chaplain Peter Klotzbach points out: That’s the point.

In any operation, a unit Chaplain’s duties extend far beyond just providing a religious service on Sunday while soldiers are away from home. Providing casualty notices to families after a service member passes; serving as an advocate when a Soldier’s situation may need a more deft touch; extending counseling sessions to those in need when they ask, and essential morale and welfare checks on soldiers in his area of operations. More importantly, it never stops.

“Everything a Chaplain does is real-world. It doesn’t matter the environment,” said Klotzbach.

While shadowing the Chaplain, Monday, to capture the variety and spontaneity that comes with being a military Chaplain, Klotzbach counseled multiple soldiers on personal matters big and small. Most of the time, they were on the spot requests or unexpected calls. Starting his day not knowing what exactly his schedule will entail and with whom, is part of being a Chaplain. Because the 164th ADA has soldiers in a few locations near the testing site, Klotzbach likes to make rounds where he can, even if no one has any specific need, just popping in and providing a friendly face to talk to creates opportunity. As he explains it, it’s referred to as “Ministry of Presence.”

“Ministry of Presence is very much a self-fulfilling term. Your presence is literally giving you the opportunity to minister to someone’s needs should they need to pull me aside. And I can facilitate that as best I can by making rounds wherever we have soldiers working,” says Klotzbach. “That presence often provides or instigates counseling opportunities and serves as a reminder or inspiration for opening up and expressing things that may weigh down on them in their daily routine while away from home.”

Not every conversation or interaction revolves around turmoil and hardship, sometimes it’s to vent about their environment at work or home, when they may not have an outlet available. However, when interactions do stray to those matters that are close to the heart, or may involve an urgency of more dire nature, Klotzbach is not only a counselor but a strong advocacy tool as well. Because he maintains confidentiality, a soldier can express their issues, particularly in times of extreme urgency, and the Chaplain will recommend the best path to their chain of command for helping them without breaking that confidentiality. There may not always be someone who needs to talk, but creating that rapport and routinely stopping where Soldiers gather facilitates being present as a positive influence in the area.

“I’ve had soldiers tell me that they like it when I stop by because they tell me, ‘Chaplain I like it when you come around, you’re just so positive, and happy.’ That is part of that routine, and that Ministry of Presence I spoke about. Maybe they don’t need to talk, or maybe they won’t remember until they see me.”

Unfortunately, his duties are not always so light-hearted. Because casualty notices must be as timely as possible, Klotzbach and other Chaplains in the Florida National Guard often cover down for notifications of next of kin from active duty installations. When a soldier passes away, this means that if he is closer than a chaplain hours away, he may need to go to a family and inform them of the family’s loss; sometimes even performing a funeral service.

“It is, without a doubt, the hardest and most painful aspect of my job. It’s incredibly difficult, and it doesn’t get easier with time. There isn’t anything you can possibly say to them that is going to make it better, you’re just there. It’s all you can do, and while it’s incredibly painful to see a heart break like that, it is incredibly gratifying to be there to help pick up the pieces if I can.”

Since discussions are entirely confidential, soldiers won’t necessarily hear about all the work or one-on-one counsels he may offer soldiers on a typical day. It’s important to know, however, that though soldiers may not see it, meeting with the Chaplain to talk about any topic is a common and regular occurrence, nor should it deter them from reaching out if needed.

“We would never share their information. Chaplains are always willing to help. It doesn’t matter what time of day; morning, noon, or night. The Chaplain’s call is 24/7,” says Klotzbach.

Ch. (MAJ) Peter Klotzbach is endorsed by Regular Baptist Chaplaincy and serves with the Florida National Guard. This article was written by Sgt. Spencer Rhodes of the 107th Mobile Public Affairs Detachment and was originally posted at dvidshub.net.

Next post Chaplain Supports Soldiers and Their Operations, No Matter the Environment