A police chaplain in Indiana ministers to his community after 10 tornadoes touch down in a single day. 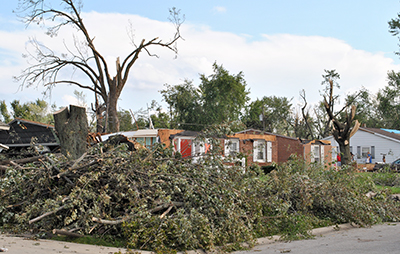 by John B. Murdoch

August 24 was a normal Wednesday afternoon around my home in Kokomo, Indiana. My wife, Hope, had gone to pick up the grandkids from school and I was finishing up some work at my desk when our son-in-law came in carrying his computer. “Where’s the safest place in your home to protect my computer?” he asked. (His computer houses his doctoral dissertation, and he is very protective of it.) I asked why the concern, and he responded that a tornado was reportedly headed our way. I had heard no tornado sirens or warnings, but we secured our computers and headed for the basement, briefly looking outside to see what was happening. By the time we got downstairs, the first tornado had come and gone. And the saga of the 2016 tornadoes had begun.

Across the street, a tree was in a neighbor’s garage, and three houses north of us another neighbor had a tree through the roof of his home. The severe damage began at the end of our block. Power lines had been snapped, multiple homes had been damaged, and an apartment complex housing over 200 units had been destroyed. This was just the beginning; from there the damages escalated to devastating.

After determining my family was safe in the basement, I headed to the Sheriff’s Department to begin ministering to our community and those who protect it. At the command post, the sheriff gave a briefing to the media. At that time our deputies had spotted nine tornadoes in Howard County. By evening, 10 tornadoes had touched down, with some resulting from the same storm.

Miraculously, though over 1,000 homes, businesses, and farms had been damaged or destroyed, no serious injuries or deaths had been reported. We praise the Lord for this. Yet Howard County still needs prayer as it rebuilds. Some of these dear people had just finished getting their homes and lives back to a new normal after a tornado hit in 2013, and they have lost everything once again.

These have been challenging days, yet exciting as God allows me to reach into the lives of our Sheriff’s Department, the community, and beyond. One of my assignments was being part of a group of deputies escorting Congresswoman Susan Brooks and Congressman Todd Young through the devastation.

While many are looking to Washington, DC, for help, we know that the real help comes from the Lord (Psalm 121:1, 2). My church, Bible Baptist Church in Kokomo, has done a great job of sending out teams to help clean up the community, including using chainsaws to remove fallen trees and limbs. Please pray as together we reach into this community with the message of hope, love, and help from the Lord.

John B. Murdoch is a chaplain with the Howard County (Ind.) Sheriff’s Department and was director of Regular Baptist Chaplaincy from 1998 until his retirement in 2015.

Are your Bible studies full of fresh concentrated truth? Three reasons why they should ...more

Perspective: Finding Contentment in an Age of Cynicism and Comparison

When people search for a congregation, can they find ...more