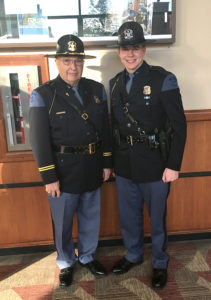 The 133rd class began June 4 and was the largest class since 2000. Among the 127 troopers sworn in was Austin Brown, son of Manning and Jennifer Brown. Rev. Manning Brown is the director and endorser for Regular Baptist Chaplaincy.

Austin Brown and David Hill met in 2015, when Austin was in the early stages of the trooper application process. “It was such a blessing to have Chaplain Hill encourage Austin during that time,” Manning says. “The selection process is very competitive. And the really great part is that Chaplain Hill was able to minister to Austin and all the recruits, having regular access to them during the arduous six-month-long academy. This is a prime example of how our chaplains are there, ready to minister in any environment.”

In addition to David Hill, Regular Baptist Chaplaincy endorses another Michigan State Police chaplain, Timothy Decker, who is the assigned to the post in Lakeview.

Churches around the country are praising God for the way He worked during their VBSes in ...more

Churches are great at filling their calendars yet struggle to do the one thing Jesus commissioned believers to do: make ...more

Ministries to Students and Women in Togo

Victor Vula is director and principal of Victory International School in Myanmar and leads Victory Community Chapel. He sends the following ministry update. Our first quarter of ...more