U.S. Army Chaplain Mark Worrell was promoted to the rank of major during a ceremony at Joint Base Myer-Henderson Hall, Virginia. 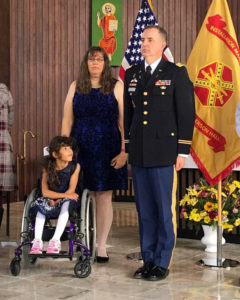 U.S. Army Chaplain Mark Worrell was promoted to the rank of major Feb. 9 during a ceremony at Joint Base Myer-Henderson Hall, Virginia. Worrell’s wife, Shelly, and their daughter, Scharleen, and other members of their family pinned the gold oak leaf cluster on his uniform. He was then sworn in as a major by the base commander. As a new field grade officer, Worrell will assume greater responsibilities in his capacity as a chaplain. The Worrells are currently assigned to the Washington, D.C., area but have orders to move to Hawaii this summer.