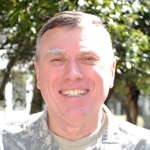 After completing 23 years and three months of service, Chaplain (Col.) Istvan “Steve” Szasz retired from the Army Reserve on July 31.

Chaplain Szasz was born in Hungary and escaped the 1956 Hungarian Revolution with his family. The Szasz family immigrated to America and settled in the Los Angeles, Calif., area. After receiving a BA from Los Angeles Baptist College (now The Master’s College) and an MDiv from Northwest Baptist Seminary, Tacoma, Wash., Steve entered the pastorate. While in his second pastorate he was commissioned in 1988 as a chaplain in the California Army National Guard.

Steve relocated to Idaho, transferred to the Army Reserve, and shortly thereafter mobilized and deployed to Operation Joint Endeavor/Operation Joint Guard, serving in 1996 and 1997. He spent almost all that time in Hungary, since he is fluent in Hungarian.

Upon his return, Steve was selected to serve in the Army Reserve, Active Guard Reserve program, where he first served as chaplain recruiter at the Presidio of San Francisco and later in Las Vegas. His next assignment was as staff chaplain at the Army Reserve Readiness Training Center, Fort McCoy, Wis., and then as deputy command chaplain at the 70th Regional Readiness Command, Seattle, Wash. In 2005 he was asked to join the newly formed Reserve Components Integrations Directorate at the Office of the Chief of Chaplains as the personnel management officer in Arlington, Va. On June 1, 2009, he left active reserve to return to traditional Army Reserve status and deployed for a tour to Operation Iraqi Freedom. His last assignment was with the 114th Chaplain Detachment, under the 11th Military Police Brigade, Los Alamitos, Calif.

Steve and his wife, Darla, have been married for 40 years. They have three grown sons and six grandsons. Though now retired from military service, Steve continues his endorsement with the Regular Baptist Chaplaincy Commission as he pursues civilian chaplaincy ministry in Idaho.

“The Lord himself will lead you. He will not fail you or abandon you, so do not lose courage or be afraid” (Deut. 31:8, TEV).