Chaplain Brad Kelsey completed five weeks of Air Force Squadron Officer School and found it to be one of the many blessings of the chaplaincy. 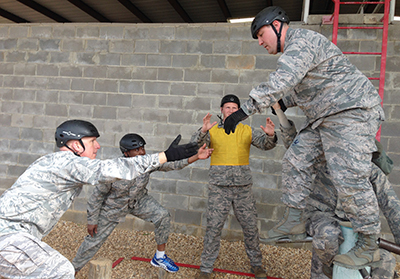 Seminary trains men for ministry. That training certainly benefited me, and I can’t tell you how thankful I am for it. God used it to develop me and to give me a foundation, and the longer I minister, the more I appreciate it. The United States military also believes wholeheartedly in the value of training, so military chaplains can expect to receive quite a bit of it.

One of the many blessings of the chaplaincy is the training that the military provides; it is top notch, being on par with universities and large corporations. Air Force Squadron Officer School, affectionately known as SOS, is no exception. I had the privilege of attending earlier this year and am the better for it.

As a chaplain, I’m an ordained minister and a commissioned officer—a captain, to be specific. SOS is professional military education for Air Force captains. Those who attend undergo five weeks of intensive, graduate-level training designed to develop more effective military officers, officers who are able to lead with greater impact and who will potentially progress to increased levels of rank and responsibility.

At SOS, participants spend a great portion of the day in the classroom and the better portion of the evening in the books. The educational process focuses on public speaking, problem solving, the promotion system, negotiation techniques, team building, the National Defense Strategy, the Senate Armed Services Committee, the United Nations, and more. Instructors don’t simply dispense information; they provide opportunities for their students to develop leadership skills. In addition to the formal writing and public speaking they are assigned, classmates work together to solve complex problems, negotiate an obstacle course, and win games designed to develop strategic thinking. And of course, it’s the military, so there’s no shortage of physical activities like running and push-ups.

That’s a brief overview of what SOS entails, but how did God use it to impact my life personally as a chaplain? Two thoughts come to mind. First, the military involves separation, particularly from family. SOS is located at Maxwell Air Force Base in Alabama, so I was away from my wife and two little children for five weeks. That’s a relatively short period of time compared to the number of months a chaplain might be separated when deployed; however, it’s still a separation, so it has its challenges. But that’s where Skype and the phone come into play. Far more important, it’s where God comes into play. Like someone once said, “Where the finger of God points, the hand of God provides.” God had His hand on that time of separation, and His grace was sufficient.

Second, as a military chaplain, I have the privilege of serving with some of America’s finest. As I said, SOS is for Air Force captains, so my classmates were not just chaplains. In fact, only one of my classmates was in the Chaplain Corps. The rest represented a cross-section of Air Force career fields. In attendance were a financial analyst, a scientist, a lawyer, several pilots, a nurse, and a logistics officer. There was even an intelligence officer who spends his evenings in a dark room watching bad people do bad things on the other side of the world via satellite.

Each of these individuals is a tremendously intelligent and gifted military professional. Many of them graduated from the Air Force Academy or another prestigious school. They are the best and the brightest, and every single one of them could easily make a great deal more money in the corporate sector, doing jobs that require far less sacrifice. So why do they serve in the military? The answer is simple: they love America. It’s that love for our nation that motivates them to serve with integrity and excellence and vision, even when it means being separated from family and being placed in harm’s way. The best part is that God has called me to a ministry where I have the tremendous privilege of serving Him by serving people like them as they serve our nation. Can it possibly get any better than that? Call me biased, but I really don’t think it can.

Seminary trained me for ministry, and the United States military continues to train me for military service. I’ve learned a lot in classrooms, and I’ve learned a lot through practical, hands-on assignments; however, it’s always the lessons that God teaches that have the greatest impact in our lives. That was certainly the case with SOS.

Capt. Brad Kelsey is chaplain of the 627 Air Base Group at Joint Base Lewis-McChord in Washington State. He is endorsed by the Regular Baptist Chaplaincy Ministries. He was previously pastor of East Wallingford (Vermont) Baptist Church.

As we begin the new year with plans and goals, I’m reminded of the words the Holy Spirit inspired David to write: “All my days ...more

The school year is winding down in Bangladesh, as children recently headed home for three weeks of vacation to celebrate ...more

NEW YEAR'S GREETING FROM NATIONAL REPRESENTATIVE MIKE HESS As we begin the new year with plans and goals, I’m reminded of the words the Holy Spirit ...more