The Role of a Trauma Chaplain

At Orlando Regional Medical Center, patients and their families would be blessed to meet Chaplain Robert Leavitt. As a trauma chaplain, he attempts to bring order and comfort during crises. 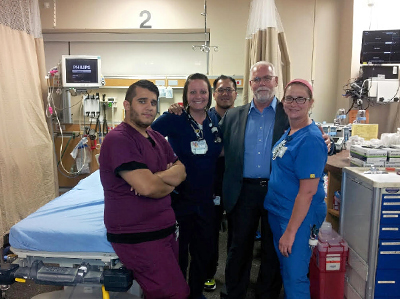 At Orlando Regional Medical Center, patients and their families would be blessed to meet Chaplain Robert Leavitt. As a trauma chaplain at this Level I trauma center, he attempts to bring order and comfort during crises. The role and function of a trauma chaplain is a varied ministry, Leavitt says. “Not all that is done necessarily is spiritual in nature, but it is designed to bring comfort and to reduce suffering of the patient and of the family.”

Leavitt shares one such story of his ministry as a trauma chaplain:

Several months ago, a young man, about 18 years old, arrived in “Trauma Alert” status—the highest status for the Orlando Regional Medical Center, designating a severe injury. All the EMS team could say was that the patient either fell or jumped from a five-story parking ramp. The patient was alive but unable to speak.

I gathered as much information as I could from the EMS personnel and law enforcement officers, including the location of the incident and whether anyone on the scene knew the patient. As the medical staff worked with the patient, I found his wallet and cell phone—undamaged and unlocked—in his clothes. Now I had his name and date of birth, and just needed to access the correct phone number to find his family. Fortunately, the patient had “Mom” and “Dad” listed as contacts. This is when I began the even more difficult part of a Trauma Alert: calling the patient’s parents and explaining what had happened.

Finding a patient’s family is sometimes their most appreciated part of my ministry. Almost every family thanks me for contacting them so quickly. Family members find great comfort being present and being involved with the care of their loved one.

Before I called his family, I learned from the medical team that the patient was critical but stable. It was too early to tell if he had any internal injuries, but his right arm and leg showed visible deformities. I also learned that his pupils were reactive to light, a good sign. The patient had a complete set of CT scans done, but it would be some time before they were read and a diagnosis made. Under these conditions, it is important to contact the family as soon as possible so medical personnel can understand the patient’s medical history and designate the proper person to speak for the patient.

After collecting as much information as possible, it was time for me to call his family. Since he was young, most likely unmarried, his parents were the natural ones to call, for they would be the proper proxy for the patient. I found a quiet place, prayed for wisdom, and made the call to the patient’s mother.

I introduced myself simply as an employee of Orlando Regional Medical Center, not yet as a chaplain. I confirmed the relationship between the patient and person I was talking to. Indeed, this was his mother. In the gentlest way possible, stressing the experience and skill of the medical team, I stated that her son had suffered injuries from a five-story fall. The patient’s mother had many questions, which I tried to answer in the most positive way, but with truthfulness. I believe it is important to provide comfort and hope, but not to the point of painting a false picture of the patient’s condition.

The family had traveled from the northeast to visit one of the local attractions. I provided the location of the hospital and my phone number. In just a short time, the family arrived in the emergency department, where it was plain to see the grief, fear, and anxiety in the eyes of the parents. I was able to counsel the family and came to understand this was not the first time their son had attempted to take his life.

I facilitated a meeting between the family and a doctor. The doctor provided a more complete medical picture of the patient, who was now critical but stable. I continued to sit with the family and listen while they explained their own struggles and the struggles of their son. As we talked, they spoke about their faith in God, opening the door for me to find out what they believe. I learned that they had knowledge of God and a desire to know God, but they did not have a reason for their faith. I shared my faith and gave them a clear understanding of why faith in Jesus Christ is the way to ultimate peace and comfort.

As the patient began to recover, the family had much to be thankful for. Their son suffered fractures but no head or neck injuries, leading me to talk to the patient and his family about the love and grace of God. I met with the family several more times and, due to my relationship with them, was asked to pray. I prayed for healing in all aspects of the family’s life, comfort, and, of course, the salvation that comes only through Jesus Christ. The patient and family would often speak of their faith in God, and I knew that God used me to either bolster true faith or provide the foundation for the Holy Spirit to work.