Chaplain Brian Gibbons, deployed on the USS Rushmore, recently visited the port of Manado, Indonesia. But after the crew left, they quickly had to switch gears from compassion to rescue. 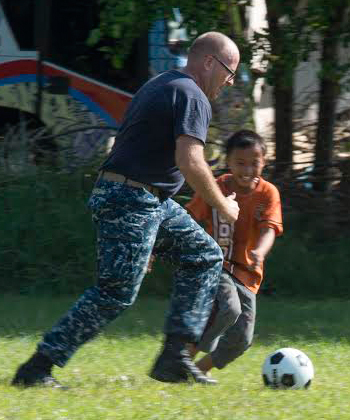 Chaplain Brian Gibbons, deployed on the USS Rushmore, recently visited the port of Manado, Indonesia. “We found people friendly in a city where Muslims and Christians live alongside one another,” he says. But after the crew left, they quickly had to switch gears from compassion to rescue.

On June 7, 17 USS Rushmore sailors and marines visited the Christian-based Panti Bakti Mulia orphanage, which cares for 55 children and has a staff of eight. “The children were excited, as this was the first time U.S. sailors and Marines have visited them,” Gibbons says. “The afternoon was filled with games, fellowship, soccer, and many selfie pictures. It touched the hearts of sailors and Marines to spend time with these dear children, and this was the highlight of our time in Manado.”

Just after leaving Manado, the Rushmore spotted people stranded on makeshift bamboo rafts. There were 65 people in all, including 12 children and four pregnant women. These people had been in a ferry that capsized and had been stranded at sea for four days. The Rushmore sent several small boats to rescue them, brought them onto the flight deck, and quickly set up an emergency receiving area for them, including medical checks.

Gibbons worked at the last station, giving the people water, food, and clothing (including the crew’s own clean, dry clothes) if needed. The following day, they were transferred to the Indonesian Coast Guard.

CNN and other media outlets covered the rescue. For a detailed account, read the report at www.dvidshub.net. 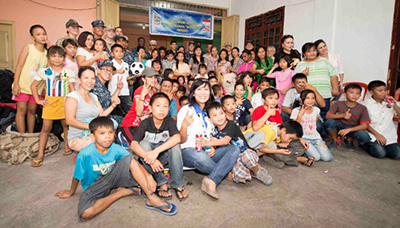 Previous post Home of the Free because of the Brave