Among the 15,000 service members involved in the 58th Inauguration of the President of the United States was CH (CPT) Mark Worrell. 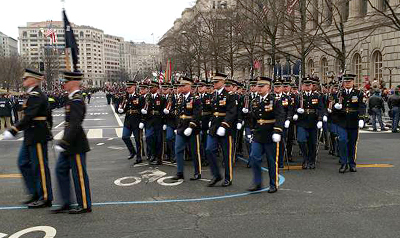 WASHINGTON, D.C.—Among the 15,000 service members involved in the 58th Inauguration of the President of the United States was CPT Mark Worrell, a chaplain with Regular Baptist Chaplaincy.

Worrell worked with SGT William McIver, an Army chaplains assistant, as part of the Religious Support Teams involved in the inaugural events Jan. 20. Worrell and McIver were blessed with the opportunity to minister to the soldiers of “The Old Guard” at the corner of 15th and Pennsylvania Avenue who rendered honors to President Barack Obama and Vice President Joe Biden as they left the White House.

During a short break, the service members had time to grab a meal and watch President Donald Trump and Vice President Mike Pence be sworn in, then it was back out on the streets as the Inaugural Parade started. The few hours in between provided ample time for Worrell to talk with each soldier he was assigned to for that day. Then as the National Colors, Trump, and Pence came by during the parade, he and McIver saluted the new commander in chief.

Previous post Giving of Themselves: The Chaplain's Call to Serve