Chaplaincy Highlight at the GARBC Conference 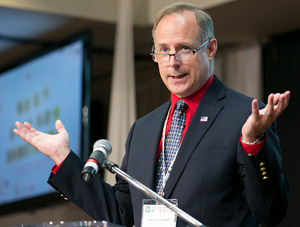 Regular Baptist Chaplaincy Director Manning Brown provided an update on the chaplaincy ministry during Wednesday’s opening session. “We currently endorse nearly ninety chaplains, ministering in a variety of settings around the world,” Brown said. “It is important that our association knows of the amazing work our chaplains are doing.” He also reported on the travel he and his wife, Jennifer, have been doing as he presents the chaplaincy to churches and meets with chaplains and their families around the country. Brown says that being an encouragement and resource to them is a priority: “I want to make sure our chaplains know that it is not only the ministry that is praying for them, but that the entire association of churches is praying for them. It means so much.” Brown also challenged the audience to be curious about the chaplaincy, finding out about the many opportunities for involvement in the chaplaincy. “You don’t have to be a pastor or even ordained to be a chaplain,” Brown said. “I am here to help those who feel led to be a chaplain, become a chaplain.” Brown ended the update by having the chaplains there stand and be recognized by the audience, who gave them a hearty round of applause.