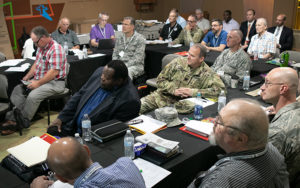 More than 30 chaplains and wives attended the Regular Baptist Chaplaincy training module Tuesday. The session began with Pam Russell, who serves as a chaplain with Public Servants Prayer and ministers in the Indiana Statehouse. During her session, Ch. Russell shared how she got involved in ministering to women in jail, which ultimately led to her current ministry with legislators. “The Lord moved me from lawbreakers to lawmakers” she joked. (Read more about Pam’s ministry at https://regularbaptistchaplaincy.org/chaplain-news/womens-statehouse-day-encourages-government-leaders/.) Ch. Russell later discussed how to “stand in the gap” with prayer for political leadership, using Scripture as a mandate. She gave tips on how to be best organized for prayer, such as keeping a prayer journal and praying the Scriptures. She closed by saying, “Prayer is a battle because prayer is the battle.”

Following Ch. Russell, Dr. Thomas White, president of Cedarville University, spoke to the group about ministering to transgenders. Citing Genesis 1:27, Galatians 3:25–27, and numerous other Scripture verses, Dr. White said that our identity goes back to Creation and is ultimately in Christ. The topic of transgenderism is a particularly sensitive topic, given today’s culture. Dr. White said it is a question of conforming your mind to how God made you or conforming your body to who you think you want to be. When it comes to ministering in the transgender environment, Dr. White said, “The best we can do is to cautiously but compassionately share the gospel of Jesus Christ.”

Both sessions included a question-and-answer time. Numerous books and other resources were also available for the chaplains to take with them.