“Prayer is a battle because prayer is the battle,” says Pamela Russell, a women’s chaplain endorsed by the GARBC. And she doesn’t just say it; she lives it—not only through her own prayers but also by encouraging others to pray and showing them how. 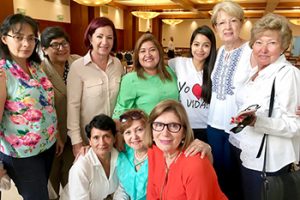 “Prayer is a battle because prayer is the battle,” says Pamela Russell, a women’s chaplain endorsed by the GARBC. And she doesn’t just say it; she lives it—not only through her own prayers but also by encouraging others to pray and showing them how. Her RBP women’s Bible study, Beyond the Ballot: A Call to Pray for Your Nation, is just one of the ways Pam influences others to join the battle and pray.

The Lord has placed on Pam’s heart a burden for a specific group of people—lawmakers, whether they are in her home state of Indiana, somewhere else in America, or across the world.

Pam began her “government leaders prayer ministry” in the Indiana Statehouse, where she served as women’s chaplain before becoming women’s ministry director for Public Servants’ Prayer. “God has granted favor and opened many doors, enabling Pam to share the Good News, lead Bible Studies, counsel leaders and their staff, found Women’s Statehouse Day, pray in the legislature, and grow relationships of trust with women state leaders,” says the PSP website.

Pam also travels to other countries to liaise with those who want to pray intentionally and powerfully for their own lawmakers. She trains them how to “stand in the gap” with prayer for political leaders, using Scripture as a mandate. Most recently Pam traveled to Brazil and Israel.

The Parliament E Fe, a ministry out of Argentina, held its biannual conference in Rio this year. Conference-goers have a vision to reach public servants and elected leaders across the globe, says Pam. “From attending these conferences I have become very aware of a movement of God around the world raising up Christians to public office, even in places that have been godless, atheistic strongholds for close to a century. These Christians are finding us and asking, no begging, us to replicate our ministry in their capitols. Serving the Lord in these governments is a struggle. They so want prayer support and encouragement,” she shares, hoping others will become passionate about ministries like hers.

Pam says the highlights of the conference included making friends and fellowshipping with brothers and sisters in Christ from around the world and praying with them; recounting what God is doing in the Indiana Statehouse; and participating in an offering to help a PEF minister in Venezuela so his family could buy food.

After seeing what God is doing in ministry to leaders, Pam has been seeking His direction for creating a prayer network of those leaders so that at any time, day or night, from anywhere in the world, prayer support can be sought and found.

Pam had barely been home when she headed out the door again, this time to attend the Jerusalem Prayer Breakfast, where about 700 people from 65 countries gathered for prayer. Public Servants’ Prayer staff accompanied several Christian legislators from Indiana and their families, plus a few friends. Their time in Israel included a tour of the Biblical sites, which Pam sums up with one word: “Fantastic!”

In addition to the time they spent praying, the Indiana legislators got to meet Israeli legislators and other leaders from around the world and attend an event especially for them in the Knesset, or Israeli Parliament. “Israel is open to meeting Christian leaders who love Israel,” says Pam, “and we are open to helping foster that relationship, of course, with the view to sharing the gospel.”

If you are interested in praying for the leaders Pam met in Rio, email her at pam.russell@thepsp.org.

To learn more about Pam’s ministry, visit http://publicservantsprayer.org/, where you will also find the names of your state’s government leaders so you can pray for them.