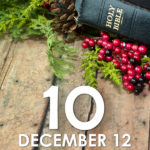 Joseph was remarkably restrained in his initial reaction to the news that Mary would have a baby. They had not consummated their relationship, yet she was carrying a child. Joseph was called righteous even before the angel came to him. And later, he demonstrated that righteousness when he took Mary home. Before reacting when something unexpected happens, first pray for discernment in understanding God’s will.

This post is part of a series of reflections that take us through the Advent season. They are intended to help us set our minds on the true meaning of Christmas. Manning Brown, director of Regular Baptist Chaplaincy, compiled these reflections for his church while he was stationed in Germany.

Ghana Church Thankful to Meet in Own Building

Crossroads Baptist Church in Ghana is celebrating one year of meeting in its own ...more

Why Churches Should Care Deeply about the SCOTUS Abortion Case

Biblical churches speak out on issues like abortion because of our submission to the authority of Scripture. When we submit to Scripture, we submit to ...more

A pastor in India is "overwhelmed with joy" to have helped fellow ...more