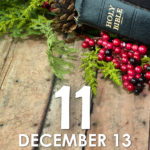 Caesar Augustus called for a census of the Roman Empire, which Judea was now a part of. The census would require all, including Jews, to register. In response to the mandate, Joseph and Mary went to his hometown, fulfilling the prophecy that the Savior would be born in Bethlehem. As you pray, give thanks that God’s plans are carried out, regardless of our understanding.

This post is part of a series of reflections that take us through the Advent season. They are intended to help us set our minds on the true meaning of Christmas. Manning Brown, director of Regular Baptist Chaplaincy, compiled these reflections for his church while he was stationed in Germany.

Why Churches Should Care Deeply about the SCOTUS Abortion Case

Biblical churches speak out on issues like abortion because of our submission to the authority of Scripture. When we submit to Scripture, we submit to ...more

A pastor in India is "overwhelmed with joy" to have helped fellow ...more