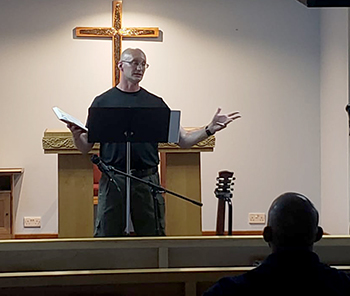 TRAVIS AIR FORCE BASE, Calif.—Capt. Brad Kelsey is an Air Force chaplain who most recently served at Eglin Air Force Base in Florida and is now headed to his new duty station of Travis Air Force Base in California. He returned June 15 from a deployment to Southwest Asia.

While Kelsey was in Southwest Asia, the Department of Defense issued a Stop Movement Order in response to COVID-19, putting a temporary halt to deployments and redeployments by not allowing troops to travel. Most of the service members he was ministering to had been scheduled to return home in April, but the Stop Movement Order prevented them from doing so.

“The fear of possibly being unable to return home for several months caused widespread discouragement,” he says. “Meanwhile, watching loved ones on the other side of the world struggle with lockdown and illness amplified that discouragement.”

Chaplains, he says, are “perfectly postured to support our struggling and discouraged military members.” For Kelsey, that support meant preaching in a weekly worship service, conducting morale and welfare checks in the units, counseling, leading unit-resiliency events, and delivering meals to people in quarantine.

That season of ministry was “a challenging time, especially since I was experiencing the same stressors as other service members,” Kelsey says. “But God’s grace was sufficient, and the result was a vibrant ministry that I will look back on with fondness for years to come.”

Next post Challenging but Vibrant Ministry amid Stop Movement Order

Moving Forward as a Fellowship

Listen as interim GARBC National Representative David Strope describes how we are moving forward as a ...more

Pastors and deacons from Indiana's Crossroads Fellowship churches attended a leadership summit focused on the ministry of ...more

You Cannot Help but Worship

You may be either an atheist, an agnostic, a Muslim, a Jew, a Christian, a Wiccan, a Buddhist, a Hindu, or simply an individual who ...more