Don Shirk retired from his role as police chaplain December 9. 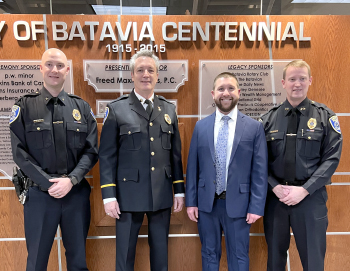 Don Shirk retired from his role as police chaplain December 9.

He served as chaplain of the Batavia, New York, Police Department for 22 years. In that time, he obtained Senior Level status with the International Conference of Police Chaplains.

In a special city council session, a proclamation of appreciation was read commending Don for his service.

Serving “the past and present officers of our community” has been “a privilege,” Don says. “We have extraordinary men and women in that capacity.”

In that session, Zack Dawson, associate pastor of Grace Baptist Church in Batavia, was appointed Don’s successor and was sworn in as the new police chaplain.

Don has been pastor of Grace Baptist Church since 1987 but will retire from the pastorate on February 1.