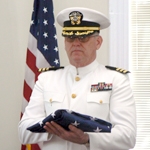 After 32 years of military service, CDR Gerald Hamblin (CHC, USNR) has retired. A retirement ceremony was held at the Bureau of Medicine and Surgery in Washington, D.C., where Hamblin served as the senior reserve chaplain. Along with family and friends in attendance were personnel from his various duty assignments, including the senior reserve chaplain for the Navy, Chaplain Admiral David Stinson. Chaplain John Murdoch had the privilege of representing the GARBC as well as singing the national anthem.

Hamblin was enlisted in the Navy for four years and then entered the Navy Reserve as a chaplain after graduating from Northwest Baptist Seminary. During his 28 years of chaplaincy he was activated over 46 times, most recently to Kuwait in 2008.

Chaplain Hamblin and his wife, Debbie, live in Bath, N.Y., where he has served for the past 20 years as a chaplain for the VA Medical Center. The Hamblins have two adult sons, Mike and Paul.

“Thank you,” Chaplain Murdoch says, “for your faithful service to God, country, and our fellowship of churches.”

Taking Off: When Kids Give a Boost to Ministry

In the ministry world, sometimes a boost is needed to help things “take off”—to spark a renewal, draw people to Christ, and get them excited ...more

When a person believes in Christ as God and Savior, immediately he or she receives a new spiritual nature and enters a close and permanent ...more

The Crisis of Vacant Pulpits

The American landscape is blanketed by churches with no ...more

Welcoming Churches and “Why Don’t You Have Women Pastors?”

Churches can Biblically respond to modern feminism with the beauty of God’s ...more