An Evening with the Second Family

GARBC chaplain CPT Mark Worrell, and his wife, Shelly, had the unique opportunity to attend a dinner for military servicemembers and their spouses, hosted by Vice President Mike Pence and Second Lady Karen Pence.

GARBC chaplain CPT Mark Worrell, and his wife, Shelly, had the unique opportunity to attend a dinner for military servicemembers and their spouses, hosted by Vice President Mike Pence and Second Lady Karen Pence.  Following is his personal account of the evening. 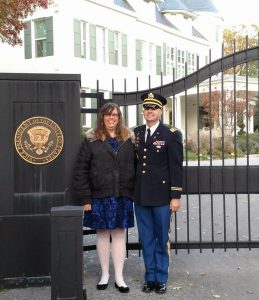 Shelly and I were invited by our battalion to take part in the inaugural Thanksgiving Dinner for servicemembers and their families at the vice president’s residence at the US Naval Observatory on Nov. 16. Enlisted servicemembers and officers from all five services attended.

After a bit of social time, we were invited to sit down while the vice president addressed us, welcoming us on behalf of the official hostess, Mrs. Pence. Vice President Pence thanked us for our service on behalf of himself and our commander-in-chief and mentioned how thankful he was for us. He stated that they start every meal by asking God’s blessing, then introduced his wife, who echoed similar comments and prayed.

We spent time getting to know the other servicemembers around the table, then got an “official” souvenir as he signed the menus for us and spent some time greeting each table and taking pictures. He even wrote “Boiler up” on the envelope of our invitation!

The US Army Strings Quartet played for the evening. It was a blessing to be in the presence of a godly leader of our country.

Churches around the country are praising God for the way He worked during their VBSes in ...more

Churches are great at filling their calendars yet struggle to do the one thing Jesus commissioned believers to do: make ...more

Ministries to Students and Women in Togo

Victor Vula is director and principal of Victory International School in Myanmar and leads Victory Community Chapel. He sends the following ministry update. Our first quarter of ...more